The farm holiday centre is situated in a short distance from the major interest points of the area.

The itineraries that you can undertake from here are many and very interesting. Obviously you can choose to concentrate on cultural journeys visiting the cities of Verona and Mantova, and if it is possible the “Vittoriale of D’Annunzio” too, or if you want you can follow the wine-and-food- way covering the route of the “Street of Wine” tasting some of the best italian wines;

Considering also the entertainment, you can visit two of the biggest amusement parks in Europe, Gardaland and Caneva World.

A trip to Verona is a plunge into the emotions of bygone times, of a city that conserves values and forms related to an ancient past of medieval and renaissance splendour, albeit it is in constant expansion in our own day. According to the poet, Shakespeare, “There is no world outside these walls…” but this also expresses the impression that strikes tourists when they enter the ancient walls that surround the city.
The tragic story of the love of Romeo and Juliet, which Shakespeare situates in the Verona of the Scala seigniory, makes the city a preferred destination for lovers and tourists seeking emotions.
During the summer months a stroll through the ancient city can reach a climax of emotions in an evening at the Arena, Italy’s largest opera theatre. The Roman amphitheatre can seat 15,000 spectators and put on a show with scenery designed by the greatest artists in the world: an evening at the Arena is unforgettable and reason enough alone to make a trip to Verona.There are visual memories and suggestions for travellers stopping over in Verona, not only due to the ancient architecture and its testimonial value, which pervades the entire city; not only thanks to the suggestive atmosphere of the narrow streets and squares, but also because of the tastes and flavours of an inimitable traditional territorial cuisine that has been perpetuated unaltered through time, which creates insoluble ties with veronese wines, which are famous and highly appraised throughout the world. 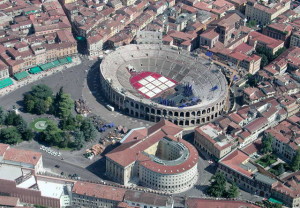 General Aspects
Verona is one of the most ancient and beautiful Italian cities. It has 250,000 inhabitants and is the largest venetian city after Venice. Near Garda Lake, the city spreads out from the shores of the Adige River, at the feet of the venetian pre-alpine hills, enjoying a fortunate climatic position.
Verona is at the centre of the most important national and international routes of communication, so it has always been an important centre of commerce, fuelled – among other things – by the important industrial and agricultural production of the province. 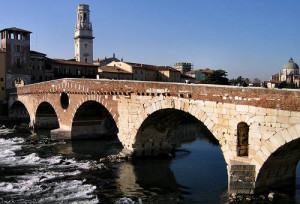 Historical Notes
The origins of the city are uncertain, as is the meaning of the name of Verona itself. In the III century B.C., it was populated by the Venetians, but as early as 89 B.C, Verona became a Roman colony and was an important crossroads: the Claudia-Augusta road, the Postumia and the Gallic road all passed through the city. In the period of the barbaric invasions, Teodorico made Verona the headquarters of his reign and built a sumptuous castle on the hill of San Pietro. Berengario, who had been elected king of Italy, chose Verona as his residence. In medieval times Verona became a free municipality and reached its maximum splendour with the dynasty of the Scala family.
After a brief dominion under the Visconti and Carraresi, in 1405 the city spontaneously accepted the rule of the Serenissima Republic. Venice’s dominion thus lasted about four hundred years, until the French invasion of 1797. With the Treaty of Campoformio (October 1797), Napoleon consigned Verona and much of its territory to Austria.
Under Austrian dominion, Verona became one of the strongholds of the Quadrilateral. Finally, Verona was united to the Reign of Italy in 1866 by popular vote.

The Amphitheatre in Verona is one of the biggest and undoubtedly the best conserved of the roman monuments. It is better known as the ‘Arena’, the Latin word for sand, which was used to cover the area where the games and entertainments were held. It is one of the greatest and most prestigious archaeological monuments in Europe and its size makes it the third largest amphitheatre in Europe, after the Coliseum in Rome and the Amphitheatre Campano in Campania beside Naples .
Even though it is known that the Arena was built in the first century A.D. during the last years of the emperor Augustus, neither Historians nor Architects have yet agreed on the exact date of the construction. Originally the Arena was situated outside the initial roman city walls. It has stood the test of time, even though the strength of the construction has been severely tried by earthquakes. 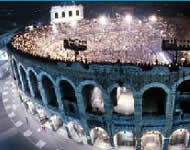 The Stage erected in the Summer in the Arena is the biggest in the world. It measures 47 metres by 28. Small garrets are positioned around the circumference of the Amphitheatre and those positioned behind the stage are used as changing rooms for the artists, who reach the stage by descending a steep wooden staircase.
The first performance of the Festival dates back to August 10th, 1913 when Aida by Giuseppe Verdi was performed. Since then the Arena has been identified with opera and has progressively improved in two respects: the artistic standard is high and performances attract a wide-ranging audience.
The opera season in the Arena, organized by the Arena di Verona Foundation, brings over half a million people to Verona every year and over fifteen thousand spectators flow into the amphitheatre every evening of the season: a truly cosmopolitan audience, with people from both inside and outside Europe. 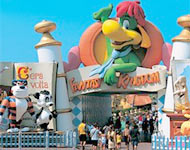 Gardaland is the funpark number 1 in Italy and is one of biggest and famous parks of Europe. 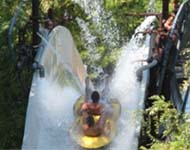 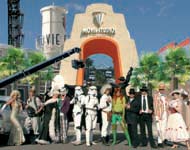 You always wanted to see the Terminator live or celebrate the reincarnation of the Blues Brothers? Now, you have the chance to experience this during your vacation at the Lake Garda!

A unique show with a variety of entertainment, developed from professional stunt men, guarantees a lot of fun. A Rambo Show with special effects, the Cartoon Network company or a stunning stunt show will definitely fascinate you.

Found in the splendid frame of the surroundings of Garda Lake, Parco Natura Viva has numerous rare animals and endangered species.

The Wine and Dine

The first route is the one that takes place in the vicinity of Lake Garda and start from Bardolino (Conti Guerrieri Rizzardi, Lenotti, Valleselle Tenuta), places long been famous for its production of red wine and high quality olive oil, owner of the PDO. In town you can taste many specialties from the lake and visit at Villa Carrara, Enoteca Bardolino, offering tastings where you can learn about and appreciate the wines of the area.

They deserve mention the cellars of the Zeni brothers, from which is home to the Wine Museum. A Bardolino take place some important events, among which the Chiaretto Festival (May), the Grape Festival and Bardolino (end of September) and the Novello Festival (November 6).
From the city you can reach Cavaion Veronese (Cesari, Eugenio Tinazzi, The Fraghe, Monte Saline) and Lazise (La Meridiana, Curtains), home of the Lamberti cellars, owned by the Italian Wine Group, which also operates in the Valpolicella area, and spends the majority of its production to export.
wine route
A south is Peschiera del Garda (Ottella, Zenato), ideal “watershed” between the Garda area and that of the morainic hills, which can be visited from here, following an almost circular route, where they meet Sona (Fabiano, Sparici Landini, Zamuner), Sommacampagna (St. Peter Vigne), where you can taste the specialties of the area in the Custoza White Wine Festival (September), Custoza (Albino Piona, Cavalchina), passed into history for the two battles conducted here in the wars of independence, as well as for its white, which gives its name to the DOC, and you get to Valeggio (Count Gardoni, Marzago Court), ideal conclusion of this route.

Gabriele D’Annunzio [1863-1938] was one of the most colorful and controversial personalities of the Great War. The Pescara-born literary innovator moved to Rome in 1881 and quickly became distinguished as a poet, novelist, dramatist and librettist. In 1914 he became a vocal activist for Italy’s entrance on the Entente side.
After war was declared, he was active as foot soldier, sailor and aviator all over the Italian Front. His daring missions to Triest, Pola, and especially his August 1918 propaganda flight over Vienna, became part of the Italian war heritage.
His career and his participation in the First World War  is commemorated at a museum he planned in detail called the Vittoriale. It included: the house called the Prioria, that contains a collection of thousand objects, old wooden statues, ceramics, crystal, silverware and carpets; the War Museum; the SVA biplane, the Antibusmarine MAS 96; the Cruiser Puglia; the Mausoleum, two motor-cars: a Fiat model 4 and an Isotta Fraschini and the open air Theatre that holds an important Summer season (ballets, operettas, theatre, cabaret, concerts both classical and light music).